Don't Send in the Clowns

I must have hidden my dislike of clowns really well,
because those  closest to me never knew it!
It was a shocking surprise when my ex after
probably fifteen years together gifted me a
clown brooch.  I wore it with reluctance.

Always a bit of a goofball clowning around it
was no wonder people assumed I liked them!
One Christmas soon after my daughter was
born my mother bought her a little clown doll....
Not knowing my particular disdain for clowns,
Cupcake also  had an aversion to clowns
and never liked that doll! 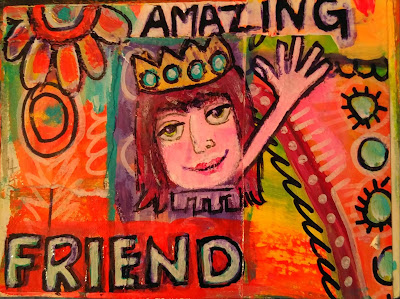 Years later someone else gifted me another
clown brooch  feeling it matched my colourful
self! It was gaudy and scary,   I never
wore it! Although I did appreciate the kind
gesture of love! 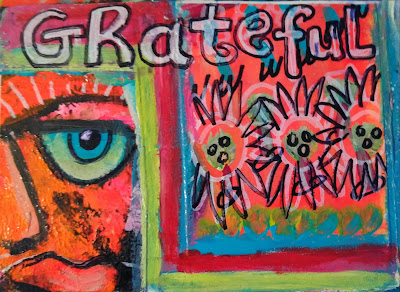 Of course I too have given many a gift over
the years that may not have been fitting for
the receiver. One year I bought the family
funny bird slippers that chirped when you
walked. I thought it would be funny but no
one was impressed except Cupcake!! I still
have a set in a Halloween box! Today it would
be an instagram hit!! Maybe I was a little
ahead of my time!! 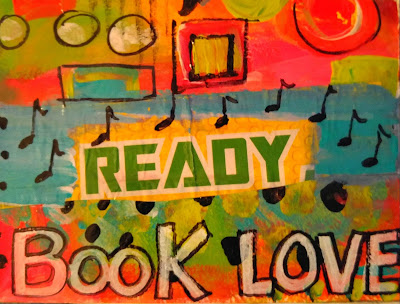 When I was very young  I crocheted a large
blue pillow for my friends new apartment!
In retrospect it was probably not exactly
what she was expecting since she gave
me a beautiful bottle of perfume! I still feel
embarrassed about that! I always did
things on a budget, but that time I had
regrets that have lasted thirty five years!! 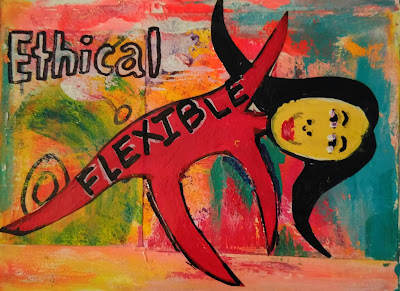 As time went on I became a better gift giver!
Of course having more money to spend
really helped!! Now when in doubt it's
booze, good chocolate or money!!
Lately there is that ugly clown making the rounds
all over the net. It's impossible to avoid seeing it
somewhere! I have no idea why I dislike them so
much. Maybe it's because it's so easy to hide
something nefarious behind all the makeup!

Is there something about you
those closest to you never knew
until late in the relationship?
Have you ever given or received a
a gift you really regretted?
Posted by Giggles at 7:18 pm

I was scared of clowns as a kid, and still don't like them. I don't like any sort of masks. I think most of the gifts I give are good. Happy PPF, hugs, Valerie

Oh no, clowns are the WORST! I somehow got roped into seeing the IT remake...bit mistake. Nightmares for a week! Love all your pieces, happy PPF!

Oh....I have a bad feeling when it comes to a few presents I have given...the times I gave poorly was when I had post natal depression, so I am slowly forgiving myself...you know what...I am sure is easy people don't even remember....I am not a fan of clowns either...I hate them actually...anyhow...your pieces are bright and colourful....lovely and happy....xx

Great artwork, Giggles. I'm not a fan of clowns either. I think for children they can be frightening sometimes. My daughter still doesn't like clowns. As for the gifts, I'm pulling out my hair trying to think what to get people for Christmas and it's not even Halloween yet.

I so love your bright and cheerful artwork! It always makes me happy. Do you ever sell prints? I can imagine you'd do really well with sales. I'd buy some!

I'm a better gift buyer than I used to be. Now I just ask for a specific list and go with that. Maybe there aren't as many surprises but at least people are getting the things they really want and need. :)

Funny, but I have been thinking about regrets this week. Sometimes regrets are omission as well as commission. Somehow we have to forgive ourselves and let go. Maybe one of these days I will completely accomplish that. I have given gifts I know now were not what the receiver wanted or expected, but I have also received the same. I have a friend who keeps supplying me with chocolate goodies although she knows I am trying to lose a few pounds. I do so love chocolate and I am trying to keep it out of the house.

Not a big fan of clowns either - the book IT I had to put away for a while as it scared me a bit too much! Lovely journal pages and oh so colourful! Happy PPF from Number 37 :)

oh, I love all the different versions of your lap desk! Regret about presents given or received ....? Yes, mostly about presents given. I have learned not to give handmade presents to people who don't appreciate it. I remember one time I put a lot of time and effort into making something for someone, even though at that time I was really swamped with work. And I could tell they didn't really want it. Since them I only give handmade presents to people that I am 200% sure appreciate it ....

Funny you were gifted your aversion! I like giving gifts and have doubtless made many mistakes over the years. These days my friends and I are choosing not to exchange gifts, maybe just go out to lunch.

It's easy to make mistakes when you don't have enough money to be creative. I think many times I've given something hand made and I'm never sure if people like them. Your are is awesome and I so agree with Sal, you should be selling, they''d be popular. Visiting from PPF.

I have always love clowns. The circus, fairs, and my Grandmother painted them. So they have always been around for me. I have received some pretty gaudy gifts but I always think about the heart of the person who gave them.

booze, chocolate or money works for me, lol

Love your colorful clown pins and paintings. Circus clowns were fun as a kid. I always liked Emmit Kelly, the sad little bum. But it seems that in these later days they have become something sinister. I got a clown to come to my daughter's birthday after she had recovered from pneumonia. It was sort of a flop.

I'm neutral what concerns about clowns. Your painting are always impressive and colorful, which makes often my day!
Wishing your weekend is great and reluctant xx

Love your colorful art. :) I'm always excited to get gifts. I don't consider candy, chocolate and money gifts per se, just something you give in addition to the gift. Unless you're my grandma. :) I don't have an aversion to anything but since having cats, I found flowers don't last past the first hour in our house, so it's something I don't particularly like getting since I know I'll be throwing them away in an hour and cleaning up the mess the cats made. Still, flowers are a go to present by my hubby when he finds himself in a time pickle and he should know better.

Such fun and colorful art Giggles! Hope you have a great weekend! Happy PPF :)

I don't mind clowns one way or the other. I guess I always liked them to be sad like Emmitt Kelly's "Weary Willie" which was a memory from childhood. The goofy, scary, over-the-top ones I can do without.

I love nice clowns. Loving these! Thanks for visiting my blog!

If I gave a bad gift I was never told about it :) But I sort of agree obout clowns, I don´t think they are scary but I just don´t like them.

Cool! And YES, my husband, seeing that I paint sometimes, gave me a big box of OIL paintings for Xmas! I DON"T paint oil, though ))

Haha, I never have loved clowns! I always hated the "Fasching-time" whenpeople are wearing masks and stuff! Always so fun to watch your art and read your stories! Love to be here! And for gifts: after I discoverd painting giftmaking is way more easy, haha ♥ Conny http://piaromsartjournaling.blogspot.de

I always enjoy your colorful art and the stories. Yep, daughter hates clowns, the only reason I liked ONE was the (I believe) the "Jimmy Stewart" clown that cried. Thanks for the visits. Blessings, Janet

I don't really like clowns either, nobody I know likes them. Love your unique style, and pops of great color

Sheila at Orange Esmeralda wrote this comment and I accidentally deleted it...sorry Sheila!!

No, I don't like clowns either, they're frightening and do slapstick not-jokes. I haven't seen the ugly one on the Net, thank goodness.
How sad that your friend didn't like the blue crocheted cushion, that would have been a very nice present for other people, including me, and far better than any perfume. I don't see why you should be at all embarrassed about taking the trouble to make a nice gift for her.
It can be very difficult to choose a present for other people, and especially for younger people, but older people too as they often have so much, and know exactly what they like. I often give a book I think the person might like, with the shop receipt inside so that they can take it back.
Your art here is such fun and so imaginative. I like "Amazing Friend" with her crown, and "Flexible" best.